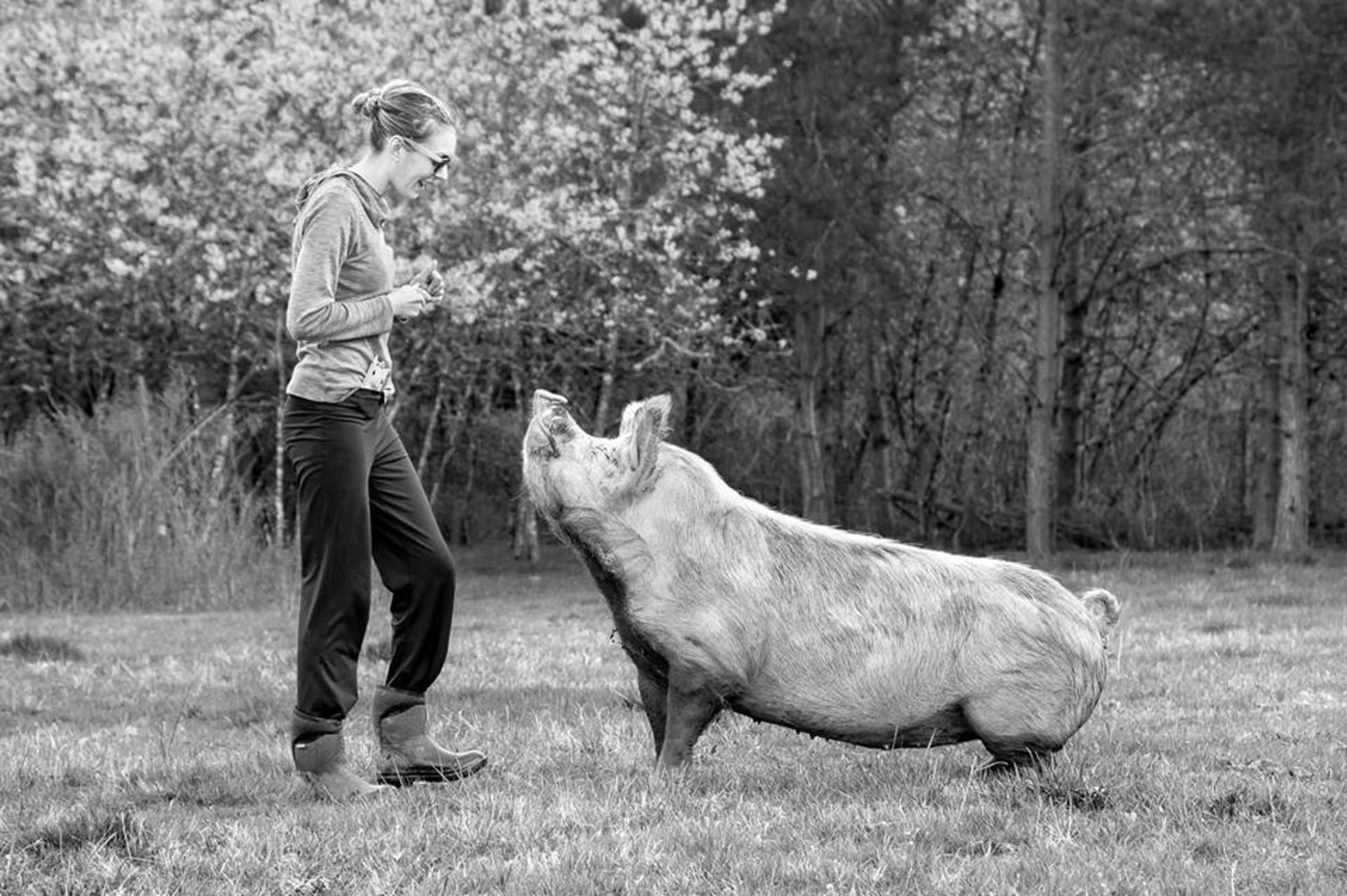 Dianne's Story: Of Pigs and Peace

I was vegetarian my whole life and vegan for about the last 10 years. I wish I remembered my veganniversary.

My family and I were watching Morgan Spurlock's "30 Days" show. He had a guy on there who was an avid hunter, etc., and he went to live at Farm Sanctuary for 30 days. They explained the dairy industry and he went on a calf rescue with them. Before that I just thought cows made milk but didn't know that they had to be continuously pregnant and that the boys went to veal. After that, my family and I went vegan. Once you know, you know.

I am vegan for all the reasons. Primarily animal rights and the environment. Human rights and health are also important to me. I love animals and can't stand the thought of them being hurt, tortured or killed, so that was enough reason for me. I have been learning more about the environmental necessity for a vegan diet recently (look up talks by Sailesh Rao, so inspiring).

Why did you move from Chicago? Do you like the vegan community here more?

I moved to Oregon for graduate school. I loved it here so much that I stayed and recruited my family to move, too! Sorry, three more people on the road and on the hiking trails haha.

Is your family vegan?

I heard you rescued two pigs, Barbie and Skipper, that live at Out To Pasture! That’s awesome. Tell us about how that happened.

I was driving past a landscaping place on my way to an off-campus course during grad school, and spotted little pink things all over a mound of dirt. They were baby pigs! So I stopped in on my way back and they were week old piglets and a mama. I visited them multiple times a week and *surprise* I fell in love with them.

At around Christmas time, the landscaping place put a sign up that said "For sale: x-mas trees, wreaths and 10 pigs." I was horrified, even though I knew what their "purpose" must have been. I called around to every sanctuary I knew to take ten piglets and a mom. Of course, most weren't equipped for that many or any at all. I was going home for winter break and was trying to do this work from Illinois. When I came back, the mom had been sold. This was really sad, because even more than the piglets, I wanted to save the mom. She was so sweet and wonderful. I used to go in their pen with them and she would know I was a friend and wouldn't hurt her babies. She trusted me. I had to find safe homes for her babies.

Unfortunately, I could only find a home for two piglets, but this turned out to save future generations. I had many conversations with the caretaker of the pigs at the landscaping place. He took very good care of them and had a nice habitat for them, but he was selling them for people to eat. After Barbie and Skipper (the two piglets) went to live at Out to Pasture, I would go back and tell him about how they were doing and show him pictures of how happy they were.

Around their 1st birthday, I got a phone call from him asking if I had a vet for them because two of their sisters he kept were having babies and one was having a hard time. I went the next day to check on them. All the pigs ended up okay, but the man was stressed. He said, "I don't know if this is worth it." Of course I said, "It's not!." I didn't go back because I knew I would fall in love with those babies too and couldn't save them.

More than a year later, when there would have been more babies to sell, I went back to check if there was another litter. There wasn't! I haven't seen pigs there since! I consider this a victory because there won't be pigs being born just to be killed. Plus, Barbie and Skipper have been such great ambassadors for their species for people to meet and get to know!

How did your relationship with Barbie and Skipper change your life and impact your vegan beliefs?

Being close personal friends with a farm animal has been a unique experience and I wish everyone could get that chance (go to a farm sanctuary and you can, too!!). My vegan beliefs weren't going anywhere to begin with, but being "Barbie and Skipper's mom" has made me even more outspoken about my beliefs. I probably talk about them and show people pictures more than people might like, but I love them and think they are so funny, cute, and smart-- everyone needs to know that they are all pigs! All pigs (all animals, really) are Esther and Barbie and Skipper. They have unique personalities.

Tell us about Barbie and Skipper. Are they shy? Mischievous? How do their personalities differ and what are their favorite things to do?

As you can imagine, it was impossible to pick who got to live out of their litter. I didn't want to pick and the farmer didn't want to pick, so I just chose the two that stuck together the most. Barbie and Skipper are inseparable sisters and both have very distinct personalities. Barbie has always been bigger and is the boss lady (hogs the food), she has a longer face and beautiful honey brown eyes. Skipper is very peaceful and goes with the flow. She doesn't have a competitive bone in her body. She has big furry ears and a cute round face. Barbie and Skipper have become good friends with Poppy, the other big pig at Out to Pasture. They like to graze in the pasture, sit for treats, cuddle together in the straw, and take mud baths. Skipper does this funny thing where if she gets a bigger treat like a pumpkin or piece of watermelon, she runs off to eat in solitude so no one steals it. Both Barbie and Skipper are great with all people. They have even spent time around babies and little dogs!

Do you consider Barbie and Skipper members of your family?

Tell us about Out To Pasture. What do you do with them?

Out to Pasture is a wonderful sanctuary not too far from Portland. It is run by a compassionate couple who dedicate their lives to helping abandoned and abused farm animals (and cats) live out their lives in peace and happiness. I help around the farm and with outreach and events. OTP is kept going by volunteers, so the volunteer days and events like Vegfest are important things for me to be involved in. I am my happiest when I am out there.

Talk about your primary occupation! Why do you feel it is important?

I am a Family Therapist and I work primarily with children and adolescents and their families to help with mental health and substance abuse issues. In addition, I work with clients with eating disorders at a second job. I speak Spanish and see many Spanish speaking families. I feel mental health treatment is important for people to live happy, healthy lives, and to break cycles of dysfunction and heal families.

Where do your jobs and your beliefs (vegan and otherwise) intersect? Do you feel like your work with therapy and the empathy camp at OTP influence each other?

Yes! I originally wanted to have a profession that incorporated animal rights (like animal law...whole 'nother story), but realized that it wasn't emotionally sustainable for me. I need successes to feel productive and positive. I realized that I would get too sad having that as my main profession. So when I changed course, I knew I would combine my passion for animals and therapy at some point. I had been brainstorming how to do this when I met a friend who was putting the camp together and into my ideas. My friend Lindsey, an elementary school teacher, and I started the Empathy at Out to Pasture Day Camp for kids this summer. We would love to continue to do similar events in the future. I would like to expand the program to include kids and teens who wouldn't normally be exposed to ideas of empathy, farm animals, etc.

Veganism obviously has significant benefits for your/others physical well-being. Do you think veganism has an important impact on our mental health also? Why is that?

I think veganism allows me to feel that I am doing my part to take care of our planet and the beings who live on it. I love living free of guilt or harm. However, living in a majority non-vegan world is difficult and causes some negative impact on my mental health. When you see pigs the same way as dogs, it is hard see them on people's plates and hear jokes about their flesh tasting good :(

I'd say, try to have grace in the process. Don't push yourself to make a complete change overnight. You're changing a lifelong eating habit. If you make a mistake or have a lapse in course, just get back up and take it one day at a time. Also, remember what is important to you. If it's the animals, think of the baby cow that will suffer for the cheese you might be craving; if it's the environment, think of all the water used and trees cut down for the quick meal; if it's health, think of how much better you'll feel and how much longer you can live when you choose the vegan option. Once your consumption (of food, clothing, etc.) becomes a more mindful activity, you might have feelings and realizations that you never had before. Embrace them! It will help you stick to the course.

Ahimsa. This is a term I learned recently. It sums up what veganism is to me so well. It is a word from ancient Indian religions meaning non-violence, compassion; to not intentionally do harm.

Vegan snack? I don't know it it's a snack, but home made (by me) vegan chocolate chip cookies.

Summer activity? Evening walks when it's cooled down, hiking, eating outside (because there aren't bugs here like there are in IL!), movies in the park, baseball games.

Herbivore design? "Compassion is Invincible" because I think that is soooo true! Compassion and peace are sustainable, hate and violence are not. I also like "Be Kind~ especially to animals" because I wish more people would be kind, to each other and to animals.

Vegan Idol? Gene Baur is my original vegan idol. He started the original Farm Sanctuary. He has been a pioneer for the vegan movement. He is very strong and inspiring!

My new vegan idol is Sailesh Rao. He is the executive director of the non-profit Climate Healers. He has written books and holds lectures about how climate change and biodiversity loss can not only be halted but can actually be healed if animal agriculture was phased out and forests were brought back. Seeing him talk in Portland a month or so ago really re-energized me!