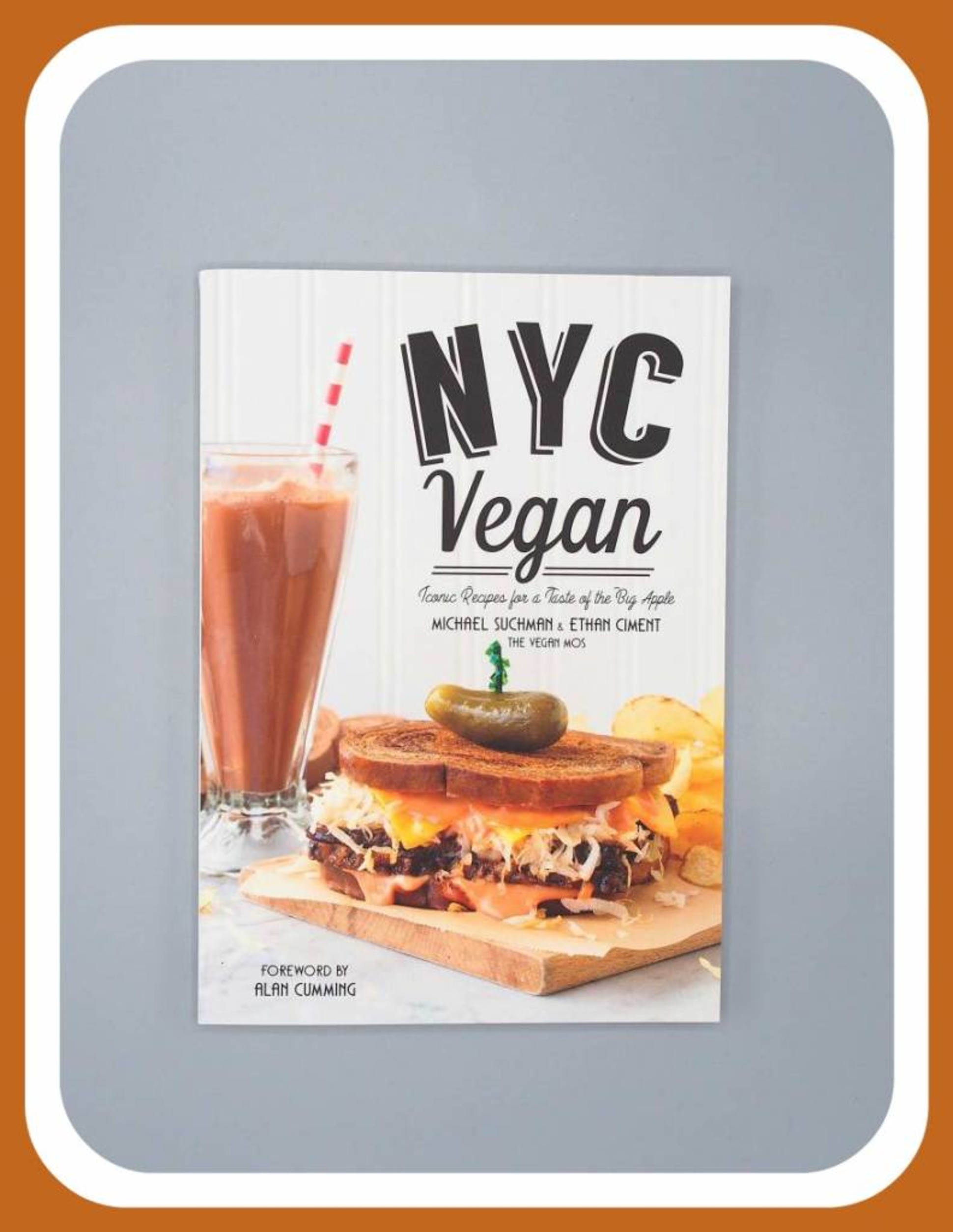 Ethan: I initially went vegetarian for health reasons. At 38 years old I was over 40 pounds overweight and already taking medication for high cholesterol for a number of years. I joined some friends in my neighborhood who were doing a group challenge to go on Weight Watchers and I decided to do it as a vegetarian because I knew I would lose weight fast that way. While I was doing this, a friend recommended that I read “The Face on Your Plate: The Truth About Food”, by Jeffrey Moussaieff Masson and for the first time I really learned about the horrors of factory farming. I knew after reading this that I could not continue to eat any animal products or benefit from animal exploitation. Ethically, being vegan was the only logical choice, and on Thanksgiving Day in 2009, after 5 months of being vegetarian, I committed to becoming vegan. We went to Michael’s family for the traditional annual gathering and family meal, but I didn’t eat anything. They all thought I was avoiding the food because I was dieting and still on Weight Watchers. When we came home, I prepared a Tofurky Thanksgiving Feast and made all of the sides vegan, and ate my first-ever fully vegan meal. I then realized that if I could do Thanksgiving- my favorite holiday of the year- as a vegan, I could be vegan all the time. It was like flipping a switch-- at the end of the meal and coming to this realization, I turned to Michael and said, “That’s it- I’m vegan.”

Michael: During this time, I was working out of the house and doing most of the cooking. I had to learn how to make food that Ethan would eat and that I would like. So, even though I wasn’t even considering being vegan, I was learning how to cook vegan food. Also during this time, Ethan, like most people when they first learn the horrors of factory farming, became full on vegangelical and would continually ask me questions like, “how is your plate of murder?” Rather than getting me to go vegan, this had the opposite effect. I can be very stubborn and wasn’t about to be bullied into doing something. Thankfully, Ethan soon realized that this was not working and accepted the fact that he was the one the changed and it was not fair to expect me to change as well. As soon as Ethan stopped pushing, space was created that allowed me to walk forward. After seeing Kathy Freston on Oprah talk about “leaning into veganism” and being “flexitarian” I started doing meatless Mondays. I eventually added in Tofu Tuesdays, Wegetable Wednedays, Tempeh Thursdays, etc. I didn’t say a word to Ethan about what I was doing, but as soon as I completed a full 7 days vegan, I looked at Ethan and said, “It’s been a full week, I am vegan now.”  I then of course went through my own vegangelical phase and found myself doing the exact same things Ethan did. Luckily, I soon stopped.

We both learned that shouting at people drives them away. So instead, rather than pushing people away, we invited them closer and started sharing delicious vegan food with them.

What is/talk about your primary Vegan Reason (animal rights, human rights, environmentalism, health)? If you don't have just one, talk about how all these things are related!

Our primary reason for being vegan is animal rights. Animals are not here for our use. The health, human rights, and environmental benefits are wonderful, but first and foremost, it is for the animals.

You talk a lot about "community" and "diversity" in the introduction portion of NYC Vegan. How does this idea of a strong community (or salad) being built from respect for differing, yet equally important, parts relate to your veganism?

A diverse and inclusive community such as the vegan community in New York City is one where people of different ages, ethnicities, and races, from a wide range of socioeconomic backgrounds and nationalities, unite under a single point of identity; our commitment to living vegan. For many of us, we found our way here because of a desire to improve our health. Some of us came because we want to achieve animal liberation. Others of us still, came to this lifestyle because of our desire as environmentalists to fight climate change. Whatever the reasons that brought us here, we choose to stay and that affects all of the above. It’s important for us to understand that just as we all come to veganism for different reasons, we also have different approaches to our activism and advocacy. This is not a one-size-fits all movement and there is room for disagreement and discussion on the best strategies to promoting veganism in order to achieve our objectives. But the idea of community is ultimately what should prevail in the end: that no matter how passionately we might disagree on the details of the “how” to achieve our goals, we are always more strongly and fundamentally united in what our shared goals are.

For those who don't know, what is VeganMos.com? What compelled you to start blogging? Where do your jobs and your beliefs (vegan and otherwise) intersect?

Veganmos.com is our Veg News award winning blog featuring recipes for delicious homemade vegan food, book, restaurant, and product reviews, travel tips, and thought pieces on animal rights. The “Mos” in our name is short for “homos”. Our friends Dan and Mike already had the popular blog “The Gay Vegans”, so we decided to use vegan as the adjective to modify Mos. In the 90’s in the LGBT community, using the term “mo” became a way of referring to one another “Oh, he’s a mo,” so we decided to reclaim it.

There is no doubt that we started blogging after much insistence from our dear friend, JL Fields. She kept pushing us to do it and eventually we just gave in. We started Vegan Mos as a way of sharing recipes for delicious, homemade vegan food. We wanted to show people that going vegan did not mean giving up any of the flavors we loved. We also wanted to highlight the intersection of LGBTQ rights and animal rights. We wanted to help people see that speciesism is no different than homophobia – both stem from a fictitious belief that one group of beings is superior to another and therefore can oppress the perceived lesser one.

Do you anticipate writing more cookbooks in the future?

We have a few ideas we are kicking around right now. But with our full time careers it can often be challenging to find the time and motivation to write.

What's your best advice to a new vegan or someone considering going vegan?

Ethan:  I think it’s human nature to gravitate towards the same 5-10 go-to foods. For example, most Americans eating S.A.D. (the Standard American Diet) eat chicken or cow meat and some starch (rice, potato, pasta, etc…) We fall into ruts. We don’t branch out in variety of foods and that’s true whether you’re vegan or not. It’s often just a reflection of laziness or, more often, lack of time and gravitating towards convenience. I just encourage folks to recognize that the overwhelming abundance of food available to us are plant-based foods; Fruits, veggies, nuts, grains, seeds, legumes and beans… there’s so much to draw from when you take the animal products off your plate. So instead of focusing on what’s “missing” from your plate, see that empty space as an opportunity to discover new foods. Try wheat berries, quinoa, amaranth or barley if you haven’t tried them. Maybe you could try Anasazi or Fava beans? Ever try a broccolini? What about Romanesco? There are so many amazingly delicious, unique and nutrient-dense foods out there. We just need to open ourselves up to trying them.

Michael: Take it one meal at a time. Do not worry about what you are going to do on Thanksgiving, or about your birthday cake, or any other far off meal. Also, shifting the focus from yourself to the animals you are saving really helps. No animal product tastes as good as saving that animal’s life.

Our dogs, Riley & Charlie. But going outside our family, we love all animals, but have a particular fondness for goats. Also, there is a newly rescued piglet at Woodstock Farm Sanctuary named for Michael. His name is Mishka and he is adorable.

Ethan: FRUIT! All kinds of fruit.

Well New York City for sure. We also love Portland.

We get asked this one a lot and we really don’t have an answer. We love them all for different reasons. However, the two with the most personal history to them are the Chocolate Chip Sour Cream Coffee Cake and the Brisket.

Bacon Had a Mom. You won’t believe the looks that gets when you wear it into a hot sauce shop.